Thank you for responding to the complaint that I filed, and for holding this important hearing today. The Commission has been so cooperative throughout this process, and I am very grateful for that. Keeping our elections free from corruption is essential to a democracy. You have consistently done just that.

I originally was not going to testify here today, but after reading both of Mr. BostromÂ’s letters responding to my charges, I felt compelled to raise some issues and pose some questions.

I have been keeping a watchful eye on the National Organization for Marriage (NOM) for the past 18 months. In California, NOM raised the bulk of the money to qualify Proposition 8 for the ballot. They came out of nowhere to become a huge force in that election. Now they are leading the fight against same-sex marriage across the country.

Their finances have always been clouded in mystery. They refuse to turn over any of their tax returns as required by federal law. We have repeatedly asked to see those records and so have many journalists. NOM refuses all requests. They feel they are above the law.

In one letter to you, however, Mr. Bostrom states that NOM raised $3.5 million in 2008 and will spend $7 million in 2009. That is the very first time they have said what they are spending, but who knows if it is true. They have made so many un-kept promises to release their 990 tax returns for 2007 and 2008, and have told so many different stories, that they cannot be trusted.

Funny thing, in the middle of the night last night, NOM finally released its way late 990 tax returns for 2007 and 2008 and posted them on their web site. This was done just in time for todayÂ’s meeting. 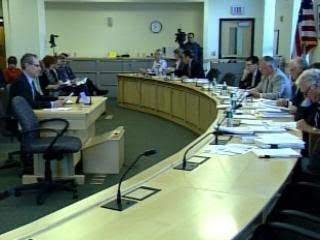 What we do know, is that NOM has sent out lots of email solicitations to raise money to be spent in Maine and several other states.

As a part of my complaint, I submitted 79 emails to the Commission that I was able to gather that NOM has sent out since November 4, 2008.

Of these, 16 mention Maine specifically, and directly ask for money. Mr. Bostrom claims that only two of these 16 solicitations should count against its $5,000 PAC reporting threshold.

And in another highly suspect claim, Mr. Bostrom states that these two email solicitations only raised a combined total of $295. ThatÂ’s it? Only raised $147.50 per email? Highly unlikely.

And Brian goes out of his way to state in fund-raising requests things like, Â“and unlike in California, every dollar you give to NOMÂ’s Northeast Action Plan today is private, with no risk of harassment from gay marriage protestors.Â” Or Â“Donations to NOM are not tax-deductible and they are NOT public information, either.Â” Or Â“Your gift is confidential: no public disclosure!Â”

Mr. BostromÂ’s letters to the Commission admit guilt. They state that they are raising money for Maine, but claim that they are not covered by the Maine statute.

Mr. Bostrom threatens you by saying that your law is unconstitutional, that election laws are a burden and limit First Amendment Free Speech, while acknowledging that they broke the law. He says that the law doesnÂ’t apply to his clients. Please donÂ’t be intimidated by him.

One statement in Mr. BostromÂ’s letter on behalf of NOM caught my attention. He stated emphatically that, Â“No other solicitations were made for ballot measure activities in Maine by email, direct mail, or other means. True? No.

NOMÂ’s Inaugural News Letter that came out in July 2009 is devoted to the Maine election on Question 1, and the last line of the article is pretty clear, Â“Your support for NOM is critical to the success of the effort.Â”

How many other solicitations has NOM made to raise money for Maine? How else have they raised money? Where did they get the $250,000 that they gave Stand for Marriage Maine? They claim not from their emails. Then where?

If the Commission staff were to talk to all nine Board members of NOM individually, IÂ’ll bet you could get these answers pretty quick.

Mr. Bostrom filled a very similar response to the Iowa Ethics and Campaign Disclosure Board when charges of financial irregularities were filed against his client in August by One Iowa and the Interfaith Alliance of Iowa Action Fund.

Maybe that is why they came up with the $295.00 as the only money they raised for Maine. They had to be well under both stateÂ’s limits after the fact, to explain why they broke the law by not forming a PAC.

I have spent 30 years in politics managing campaigns. I have filed and read literally thousands of campaign reports in probably 25 states. I have never seen this type of blatant disregard for election laws like I have seen with NOM in several states.

All I have done in Maine was to pull together evidence found in the public record and point out what I felt were campaign reporting irregularities. I just want to get to the truth.

I did that in California right after the election which led to the ongoing investigation of NOM by your counterpart there, the Fair Political Practices Commission.

My citizen activism in Maine and California has caused me to get subpoenaed by the National Organization for Marriage and its allies in a federal law suit. That suit was filed so they could keep their contributorÂ’s names secret, just like Mr. Brown promised his donors giving to your election.

They are retaliating against me in an attempt to silence me and bully me by dragging me into federal court.

This is what they do to stop any attempt to shed transparency on their operation. I am not scared, because I know that I am doing the right thing. The Fair Political Practices Commission is not afraid to investigate NOM and its allies because they know that it is the right thing to do as well. I hope that the Maine Commission on Governmental Ethics and Elections Practices will stand up to their threats and scare tactics.

An investigation is the only way to get to the truth.

Today, October 1st marks the start of LGBT History month in this country. It began 15 years ago to encourage openness and honesty for those of us who happen to be gay, lesbian, bi-sexual or transgender.

Please donÂ’t let NOMÂ’s threats against your state deter the five of you from doing the right thing today, by always striving for openness and honesty in the electoral process.

Thank you very much.