AUGUSTA, Maine Â— Maine’s campaign oversight board overruled a staff recommendation Thursday and authorized an investigation into fundraising by groups supporting the campaign to repeal the state’s gay marriage law in a Nov. 3 referendum.

The Commission on Governmental Ethics and Election Practices voted 3-2 after some members said there was sufficient evidence to warrant a closer look at finance reporting by the National Organization for Marriage, a major contributor to Stand for Marriage Maine.

The latter group is leading the people’s veto campaign to repeal Maine’s legislatively enacted law recognizing same-sex marriages. Maine’s law, which was signed in May by Gov. John Baldacci, and the challenge forced by a petition drive have drawn national attention.

In the case before the ethics commission Thursday, Californians Against Hate founder Fred Karger complained that the Princeton, N.J.-based National Organization for Marriage is circumventing Maine law by not reporting the names of donors whose money is spent by the Maine campaign. 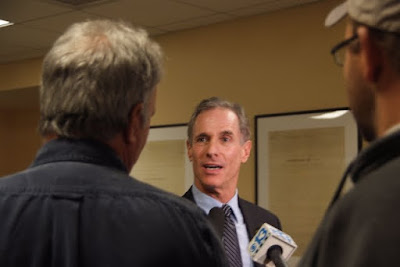 Karger’s whose group was formed to identify major donors in last year’s Proposition 8 campaign in California, in which voters overturned that state’s same-sex marriage law. Karger said NOM’s finances “have always been clouded in mystery.”

“They’re trying to shield their donors,” Karger said Thursday. “An investigation is the only way to the truth.”

NOM attorney Barry Bostrom said the organization’s policy is to collect donations not targeted for specific campaigns so donors will not have to fear business boycotts, property damage and other forms of harassment by same-sex marriage activists. Bostrom said NOM complies with state campaign financing laws in all states in which it’s active.

Brian Brown, NOM executive director, dismissed Karger’s complaint as “nothing more than an attempt to harass and intimidate those of us who believe in the core truth that marriage is between one man and one woman.”

Thirty states have voter-approved gay marriage bans in their constitutions, and federal law bars federal recognition of gay unions. Six states have passed laws or have been ordered by the courts to allow same-sex marriage, but the people’s veto fight has focused national attention on Maine.

“I do believe Maine is now the No. 1 fight throughout the country,” said Brown. “Of course it’s critical.”

While the state ethics commission has authorized an investigation into whether violations of Maine’s finance reporting law occurred, it did not issue a deadline for a finding, either before the Nov. 3 election or after it. The commission staff had concluded there was not enough evidence to justify an investigation.