The news was first reported on the highly regarded LGBT Blog

Towleroad late Monday. The letter stated, Â“that he not only was a big opponent of CaliforniaÂ’s Proposition 8, but now supports its reversal.”

The letter dated February 13, 2009, closes with a second and even stronger endorsement, Â“As I said, he will continue his opposition to Proposition 8 and support its repeal.Â” 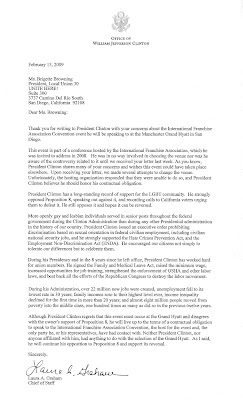 Â“This has got to be unprecedented,Â” said Fred Karger, Founder of Californians Against Hate. Â“A former President of the United States asking a state Supreme Court or the voters to reverse a ballot proposition. What an ally! Thank you President Clinton.”

The California Supreme Court will hear oral arguments on Prop 8 in a little over two weeks on March 5th in San Francisco. The Court will then issue its decision within 90 days.

Â“We were very disappointed that President Clinton crossed the picket line on Sunday in San Diego and spoke to the International Franchisee Association, but we are sure happy now,Â” added Karger.

Californians Against Hate and UNITE HERE launched the boycott of Doug ManchesterÂ’s San Diego hotels on July 18, 2008 after he gave $125,000 in early money to the Yes on 8 campaign. Manchester owns the Manchester Grand Hyatt Hotel where Clinton spoke. To read about the boycott go to: http://www.boycottmanchesterhotels.com/

Labor and LGBT leaders took out a banner ad last Thursday in the New York Daily News that included an open letter to President Clinton asking him to move his speech to a different hotel and not to cross the picket line at the Manchester Grand Hyatt.

In her letter, Ms Graham went on to say, Â“We made several attempts to change the venue. Unfortunately, the hosting organization [International Franchisee Association] responded that they were unable to do so, and President Clinton believes he should honor his contractual obligation.Â”

To view President ClintonÂ’s letter in its entirety, click on the Towleroad link: http://www.towleroad.com/2009/02/clinton-regrets.html then scroll down to the end of the story to see the letter.