SAN DIEGO, CA — Five prominent leaders who have been boycotting San Diego developer and hotel owner Doug Manchester for one full year, held a news conference on Friday to announce plans to take the boycott of the Manchester Grand Hyatt Hotel in San Diego global for Year II of their highly successful boycott.

They unveiled three large posters in English, Spanish and Japanese representing the expansion of the Manchester Hotels Boycott to the world. Pointing to the enormous success of Year I, which by Manchester’s own estimates has cost his Hyatt property $7 million alone; the group explained their plans to expand the boycott.

“We will be asking the public to please not cross the line,” stated Boycott organizer Fred Karger, founder of Californians Against Hate, while holding up the yellow caution tape (photo above) representing the theme of Year II. “We want everyone to really think long and hard before going in to Mr. Manchester’s hotels. Don’t support bigotry and discrimination by spending money at either Manchester Hotel only to have it used against us. Doug Manchester gave a whopping $125,000 early contribution to California’s Proposition 8. Prop 8 ended marriage equality for millions of Californians when the voters narrowly passed the Constitutional Amendment last November.

Also speaking at the news conference was longtime LGBT activist and San Diego Gay Pride Grand Marshall, Cleve Jones, who discussed how the organizers were going to reach out to all international tour operators, travel planners and meeting planners. Brigette Browning, President of UNITE HERE Local 30, whose union has been so successful in encouraging over a dozen major conventions to cancel their meetings at the Manchester Hyatt, spoke about all the lost business due to the boycott. She explained that number represents over 100,000 room nights. Rick Jacobs, Founder and Chair of the Courage Campaign, representing over 700,000 members, asked Governor Schwarzenegger to “Fire Doug Manchester” from the board of the prestigious California Travel and Tourism Commission, because the passage of Prop 8 will cost the State of California $1 billion in lost revenue. Also speaking at the news conference was well known San Diego City Commissioner Nicole Murray- Ramirez, who discussed the Human Relations Commission’s, which he chairs, unanimous support of the boycott.

Here are the three posters: 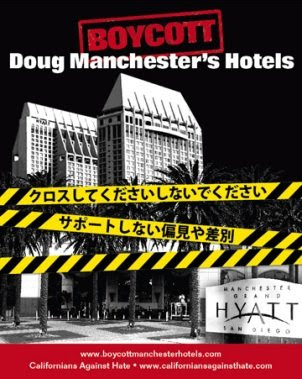 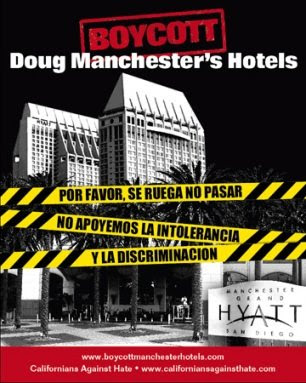 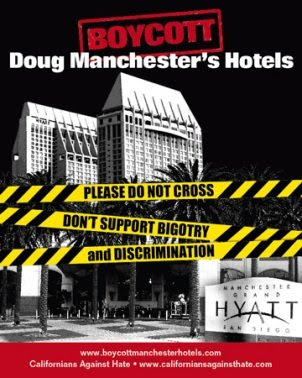