WASHINGTON, DC Â– At its third demonstration in 3 weeks, an enthusiastic group of dedicated volunteers spent Sunday afternoon in front of the Whole Foods Market (NASDAQ: WFMI) in the heart of WashingtonÂ’s Gay Neighborhood. This protest follows similar ones held in Los Angeles and New York the previous two weekends. The demonstrations against Bolthouse Farms are because of a $100,000 contribution from William Bolthouse, Jr. to CaliforniaÂ’s Protect Marriage Â– Yes on Proposition 8 Campaign. If passed, Proposition 8 would eliminate same-sex marriage in California.

Demonstrators held up signs and handed out Â“DonÂ’t Buy BolthouseÂ” flyers to hundreds of shoppers entering the Whole Foods Market. The flagship store is located just a few blocks off DuPont Circle in the heart of the capitolÂ’s heavily gay district. The store is 40,000 square feet and is the largest Whole Foods in Washington, DC. Whole Foods carries Bolthouse Farms Drinks in the produce section of its store. 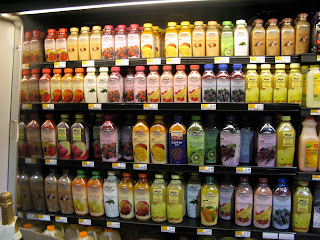 William BolthouseÂ’s huge financial support was one of the main reasons that this constitutional initiative qualified for the November 4th ballot. His money helped enable Protect Marriage to hire hundreds of paid professional petition circulators to collect the signatures necessary to qualify this initiative for the ballot. 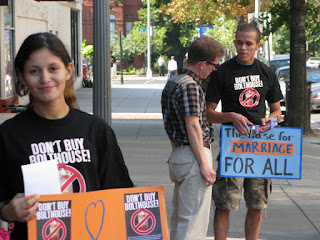 Mayita and Anderson the Mighty Duo Out Front of Whole Foods 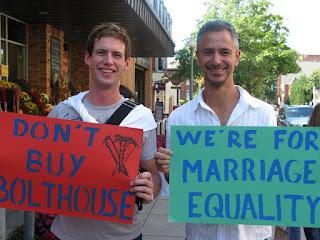 Andrew and John, Who Have Been Together for 7 Years, Live in Salt Lake City, But Joined in the Demonstration 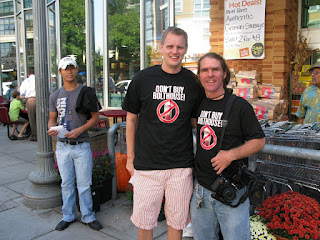 Joey, Jason and Ward Ready for the Next Shopper

Â“We will continue to work hard to get the message out to the gay and lesbian community and our millions of friends, family members, neighbors and co-workers all over the United States to Â“Don’t Buy Bolthouse.Â” In the weeks ahead, more demonstrations may be held around the country. Everyone across the United States will be aware of Mr. BoathouseÂ’s $100,000 contribution to eliminate marriage in California,Â” said Fred Karger, Campaign Manager of Californians Against Hate, which organized SundayÂ’s Washington, DC demonstration and the two held the previous weekends at Ralphs Supermarket in Los Angeles and Whole Foods Columbus Circle in New York. 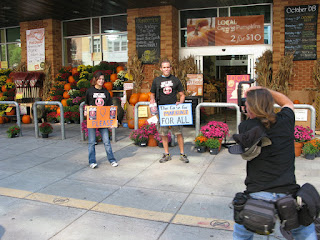 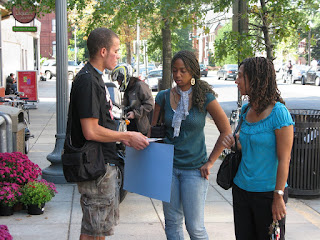 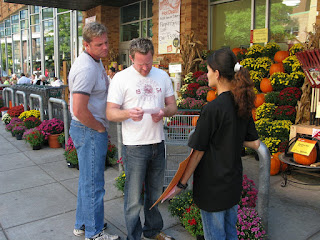 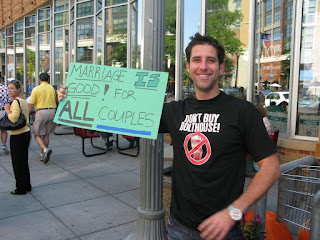 DC Greg Proclaiming the Marriage Should be For All
And go to our blog for more great pictures from our Washington, DC. New York and Los Angeles demonstrations: http://californiansagainsthate.blogspot.com/

Â“William BolthouseÂ’s $100,000 contribution is an insult to gay and lesbian Americans,Â” concluded Karger. Why should we spend our hard-earned money buying Bolthouse FarmsÂ’ products only to have it used against us?Â”

On September 20, 2008, Fred Karger released a letter explaining our actions and the reasons for Â“DonÂ’t Buy BolthouseÂ” in a letter that was faxed to Bolthouse Farms Chairman, Andre Radandt (William BolthouseÂ’s son-in-law) and William Bolthouse, Jr. A copy of the letter can be found at: http://www.dontbuybolthouse.com/letter.html

Bolthouse Farms likes to say that William Bolthouse, Jr. is not involved in the company, but a quick look on its web site http://www.bolthouse.com/html/trade_company_history.html says that the third (W
il
liam Bolthouse, Jr.) and fourth Bolthouse generations (Andre Redandt, his son-in-law) operate the company.
— end —